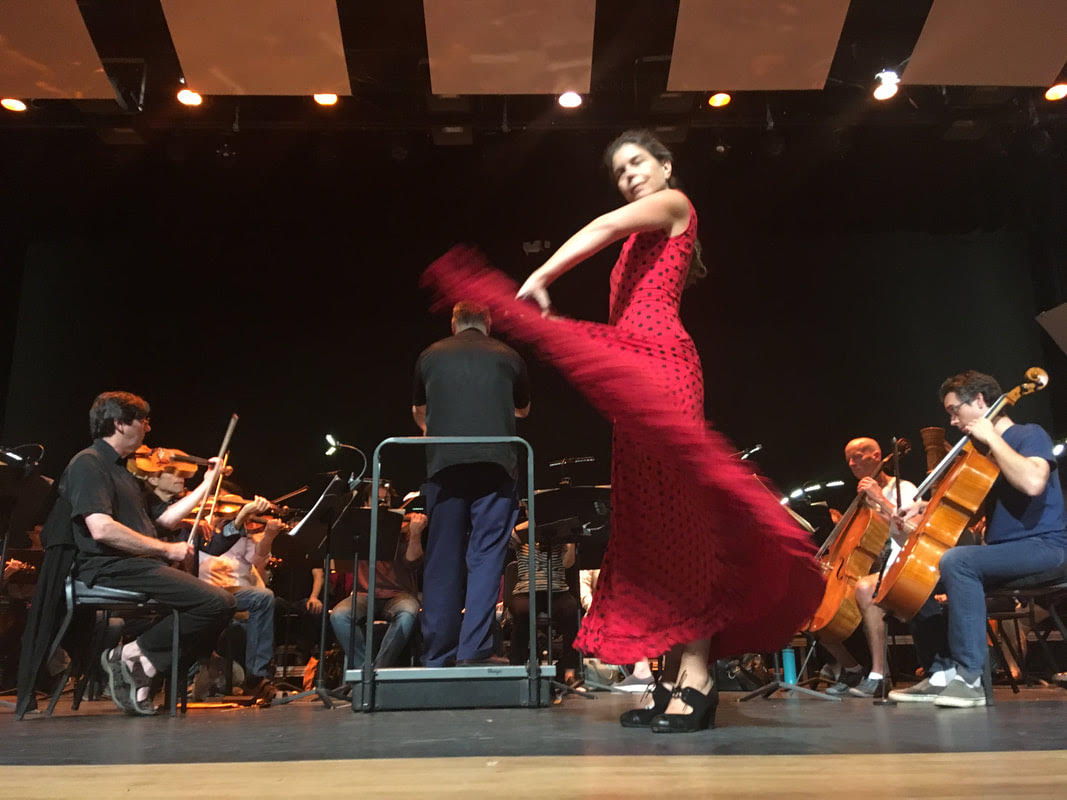 Classical Guitar, Flamenco Dance and Voice at The Chapel Restoration

Terry Champlin, classical guitar, Katie Garcia-Renart and Nichole Bernhardt, flamenco dance and voice, will perform at the historic Chapel Restoration in a program of Bach, Cello Suite No. 2; de Falla, Ritual Fire Dance and Sevillanas (traditional) on Sunday, June 5 at 4:00. The concert is free though donations are appreciated. Proof of vaccination and masks required.

Almost twenty years ago Katie García-Renart and her father, the brilliant cellist Luis Garcia-Renart decided to unite the two seemingly dissimilar art forms they loved most–flamenco and Bach’s music. Both share strong rhythms and melodies, the combination was not as far-fetched as it seemed. With the death of Luis, his student Terry Champlin had the honor of stepping in for Luis with an adaptation of Bach’s 2nd Cello Suite.

Katie García-Renart, choreographer and dancer, trained in Madrid, where she pursued research studies in flamenco dance and pedagogy. She has performed in various venues in Spain and throughout the United States. She was the director of the Kaatsbaan Academy of Dance in Tivoli, NY, and was a long time faculty member of Kaatsbaan’s Extreme Ballet (summer intensive course). Ms. García-Renart currently serves as assistant professor of dance at Bard College at Simon’s Rock.

Terry Champlin was voted Outstanding Individual Artist by the Hudson Valley Council of the Arts. His compositions have been featured on NPR, WNYC and the Nova series. He composed and played on the lead track of Pete Seeger’s last album “The Storm King.” He has performed and recorded widely. Terry has taught at Vassar College and the Mannes College of Music in New York City.

Nicole Bernhardt, dance and voice, began her flamenco career at age sixteen, under the tutelage of Maraquita Flores in Upstate New York. She attended the University of New Mexico, pursuing a degree in dance with an emphasis in flamenco. After graduating from Bard College with a BFA in dance and choreography in 2002, she studied and performed with Maya De Silva in NYC. Presently she studies flamenco with Kati Garcia-Renaat.

The Chapel Restoration is located at 45 Market Street, directly across from the Metro-North Train Station, where parking is free on Sundays. This concert is made possible, in part, through a grant from the Putnam Arts Council’s Arts Link Grant Program with public funds from NYS Council on the Arts with support from the Governor’s Office and the NYS Legislature and Putnam County and with contributions from the public.