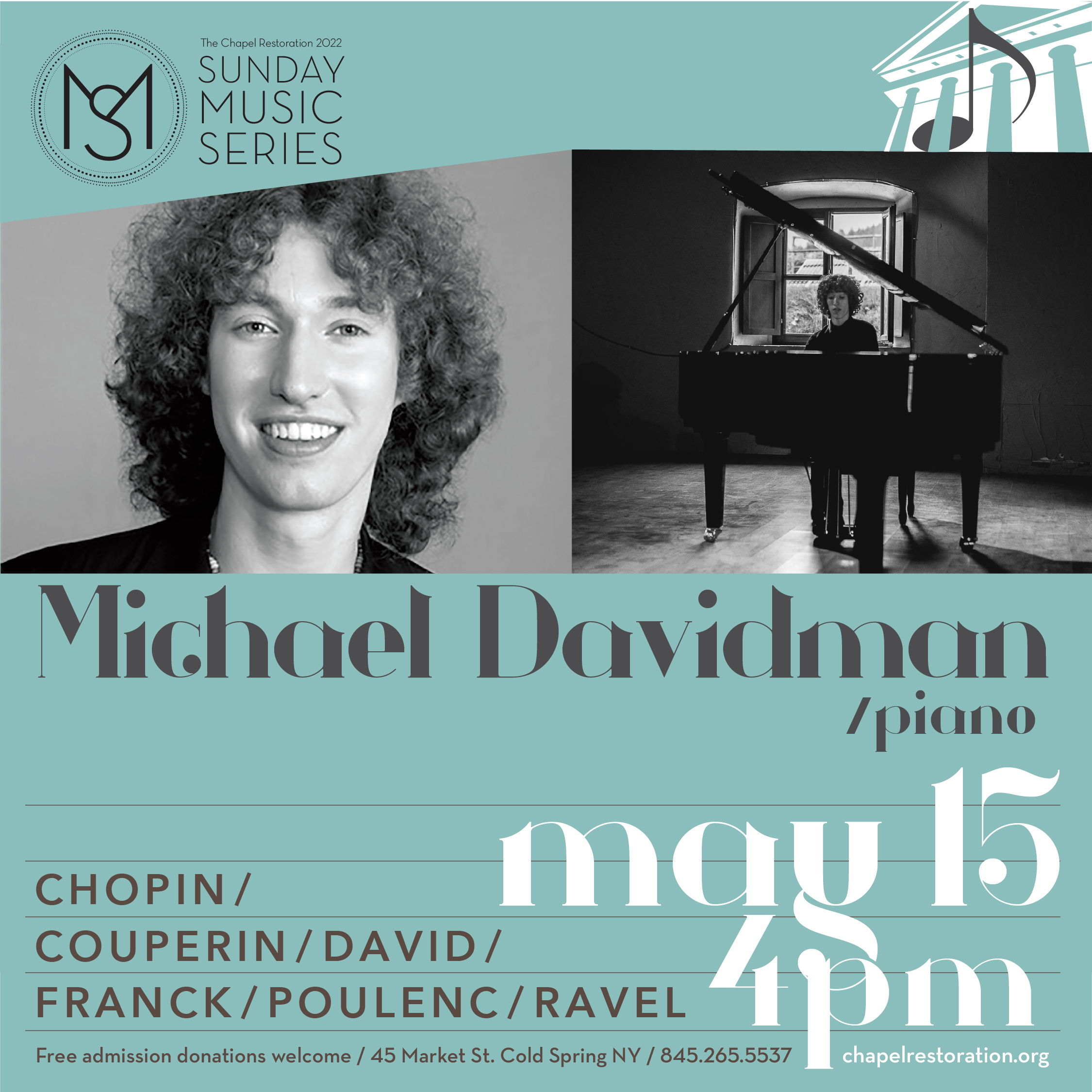 Piano phenomenon Michael Davidman will take the stage at Chapel Restoration, May 15, in a program of Chopin, Couperin, Franck, Poulenc and Ravel. The Sunday concert, at 4:00, is free. Audience donations welcome. Proof of vaccination and masks required.

Recent master’s graduate from Juilliard, with undergraduate degree from Curtis Institute, Davidman has amassed more competition wins, awards, solo performances with major symphonies and critical acclaim than can be fully listed here. Among them, first place in the Precollege Concerto Competition at age 10, at 12 and again at 16. Chosen at age 13 to perform in a master class by Lang Lang, who said of him, “You play beautifully and are technically brilliant.” Grand Prize, USMA Foundation’s 9th International Music Competition. 2021 American Pianists Awards Finalist, “One of the best performances I’ve heard in recent years,” Upstage. “His account of Rachmaninoff’s complex and quirky sonata was electrifying…gasps were heard from the spellbound audience,” The Classical Music Journal.

Davidman’s concert appearances include as soloist with the Philadelphia Orchestra, Indianapolis Symphony, Monterey Symphony and West Point Band; as soloist or chamber player in Alice Tully Hall, Carnegie Recital Hall, and Philadelphia’s Kimmel Center; and in the Burgos International Music Festival, Spain, Teatro Alfieri, Italy, and in St. Petersburg with the International Academy of Music.

A New York native, Davidman has received scholarships from the Chopin Foundation and from Juilliard. Piano lessons began at age five at the Greenwich House Music School.

The Chapel Restoration is located at 45 Market Street, directly across from the Metro-North Train Station, parking free on Sundays. This concert is made possible, in part, through a grant from Putnam Arts Council’s Arts Link with public funds from Putnam County and NYS Council on the Arts with support from the Governor’s Office and the Legislature. This season’s Sunday Music Series is also supported by contributions from a chapel board member and from a member of the Cold Spring community.