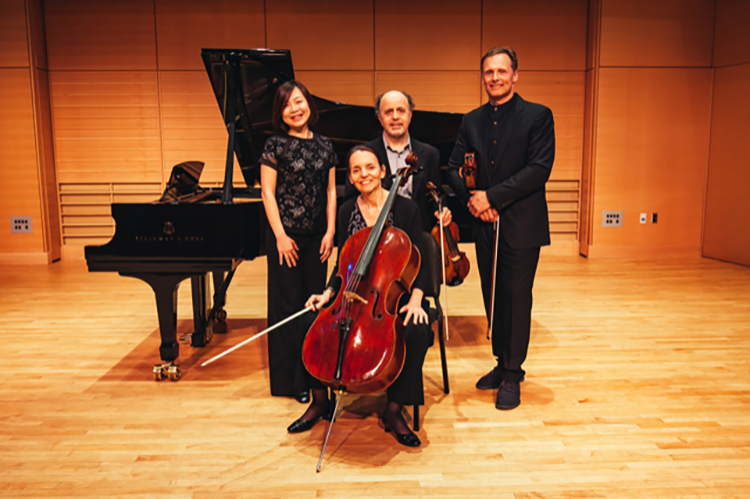 Violinist Joel Pitchon is active as a soloist, concertmaster and chamber music player. He has received acclaim for his performances with nationally and internationally renowned ensembles.

Pitchon studied with Lewis Kaplan, Oscar Shumsky and Joseph Fuchs, and received his degrees from The Juilliard School. He has served as the concertmaster of numerous orchestras, including the Orquestra Ciutat de Barcelona (Spain), the New York Virtuosi Chamber Orchestra, the Colorado Music Festival Orchestra, the New Zealand Symphony (guest), the National Arts Centre Orchestra (Ottawa, Canada, guest) and the EOS Orchestra (NY). He has participated in many concerts in the United States and abroad with the Orpheus Chamber Orchestra and the New York Philharmonic.

Mr. Pitchon also works extensively in chamber ensembles. He has been a member of the Forster String Trio, the Walden Chamber Players and the Kinor String Quartet, among other groups. Each summer he participates in a series of concerts as leader of the New Baroque Soloists. Mr. Pitchon is currently a member of the Sage Chamber Music Society.

As a soloist he has performed with the Orquestra Ciutat de Barcelona, Philharmonia Virtuosi, and the EOS Orchestra among others. The New York Times wrote of his playing in the EOS production of Stravinsky’s L’Histoire du Soldat “…superb playing by Joel Pitchon….”

He has appeared on numerous radio and television broadcasts including WGBH, WNYC and PBS. Mr. Pitchon was featured on the TV3 Catalunya program Cadencia, and has been interviewed about his work for The Strad magazine. He has recorded for Deutsche Grammophon, CBS Masterworks and Vox Cum Laude, among others. Recordings include a CD of four Sonatas for violin and piano by Clifton J. Noble, with the composer at the piano for the Gasparo label; New England Legacy, with pianist Jonathan Bass of works by Quincy Porter, Walter Piston and Amy Beach, also recorded for the Gasparo label; Sun Threads, a recording of the chamber music of Augusta Read Thomas, made with the Walden Chamber Players, is available on the ARTCD label; works of composer Donald Wheelock, also with the Walden Chamber Players, is available on the Albany label, and a further edition of works by Piston, Perera and Bernstein for piano trio will soon be released on the Bridge label.

Marie-Volcy Pelletier, cellist, is a native of Paris. She received the Premier Prix in Cello and Chamber Music from the Conservatoire National de Région de Boulogne-Billancourt, France, where she studied with Michel Strauss.

Ms. Pelletier was a member of the Lyon Symphony at the age of 21. Subsequently she won a Fulbright Scholarship to study with Bernard Greenhouse, cellist of the renowned Beaux Arts Trio, at the New England Conservatory. She has been the acting principal cellist of the Orquestra Ciutat de Barcelona in Spain. While living in London Ms. Pelletier frequently participated in concerts of the London Symphony Orchestra and was a member of the BBC Orchestra. She has been featured in chamber music concerts and given recitals on both sides of the Atlantic.

Pelletier was a founding member of the Concert Players String Trio in London, the Forster String Trio and the Kinor Quartet in New York City. She was also a member of the Laurentian String Quartet, which held a residency at Sarah Lawrence College in New York. She has performed at the Monadnock Music Festival in New Hampshire; the Light House Chamber Players in Cape Cod, Mass.; the Mohawk Trails Concerts; and the Manchester Music Festival in Vermont.

Soon to be released on the Bridge label, Ms. Pelletier may be heard on a CD of piano trios by Piston, Perera and Bernstein.

Recognized as a highly effective teacher, Pelletier is a Lecturer in Cello Performance at Smith College. She is currently a member of the Sage Chamber Music Society.

Anthony Berner is a founding member of the Deerfield Trio. As a violinist and violist member of the 92nd St. Y Chamber Players, he has performed as soloist and in chamber music concerts throughout the NYC area at such venues as Lincoln Center for the Performing Arts, the 92nd St. Y and the Longhouse Chamber Series. He has performed at the Aspen Music Festival, the Bowdoin International Music Festival, the Saint-Maximin Festivale de Musique and the East Hampton Longhouse Festival.

Mr. Berner is a graduate of Harvard University where he was a four-year member of Leon Kirschner’s chamber music seminar. His principal teachers include Lewis Kaplan, Lillian Fuchs. He has served on the faculty of the Lyra Music Workshop and Festival at Smith College and performs regularly in chamber music collaborations throughout New England. He is a Trustee of the Marlboro School of Music and currently on the music faculty at Deerfield Academy where he teaches violin, viola and chamber music.

Native Taiwanese, Ms. Yu-mei Wei has appeared as a soloist with various orchestras in the United States, Europe and Taiwan. In addition, she has also given recitals in Germany, Poland, the United Kingdom, the Netherlands, Thailand, Hong Kong, China, and her home country of Taiwan. As the first Taiwanese musician to tour in Poland, she treated crowds in Warsaw, Poznan, Blawistok, and Kalisz with memorable performances that won her many accolades.

Her passion for chamber music propelled Ms. Wei to form the Taipei Fine Arts Trio in 1994. The trio gave a series of performances and seminars in Beijing, Shanghai, and Hong Kong in promoting Taiwan-China cultural/musical exchange. The trio represented Taiwan Council of Planning and Development to participate in the first Taiwan Arts Festival in Seattle. The Taipei Fine Arts Trio had released 3 recordings: Taipei Fine Arts Trio, Musical Feast from Chi Mei (Piano Trio I), and Millennium 2000. Since 2005, Ms. Wei has teamed up with her sister to perform duo piano recitals regularly.

Upon the completion of her graduate degree, Ms. Wei returned to Taiwan in 1994 and began her career as a soloist and a chamber musician. She then moved to Deerfield in 2017 with her family. She is currently teaching at the Deerfield Academy and Taipei National University of Arts.