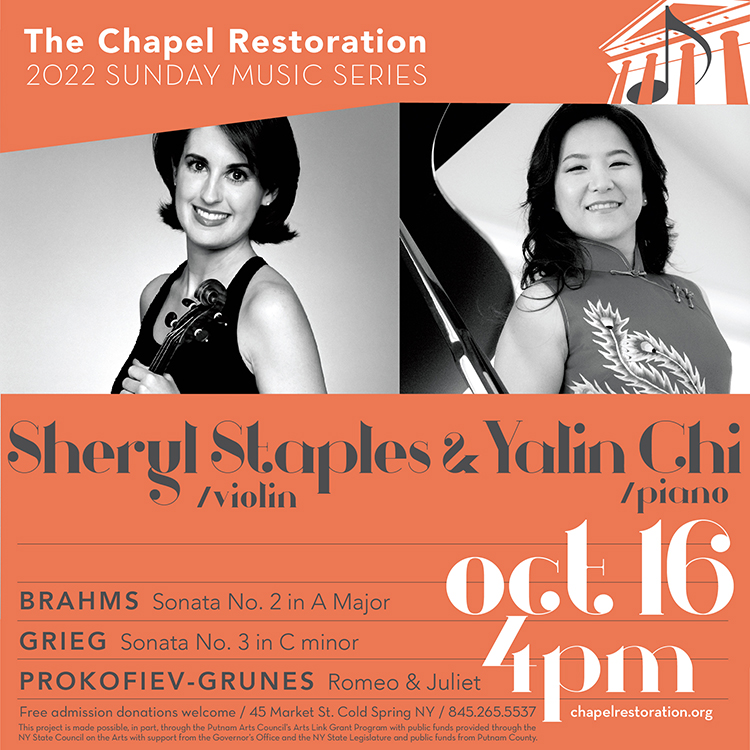 Ms. Staples and Ms. Chi will offer a rich program featuring Brahms Sonata No. 2 in A Major, Grieg Sonata No. 3 in C Minor, and Prokofiev-Grunes “Romeo and Juliet.” The concert at the historic landmark on the banks of the Hudson River is free and open to all. Donations are suggested and deeply appreciated. Masks are required.

The New York Times has described violinist Sheryl Staples as “a perceptive musician, who draws a wonderful array of vibrant and luminous colors and (plays with)…interpretive honesty and unmannered elegance.” Ms. Staples is Principal Associate Concertmaster of the New York Philharmonic, where she made her solo debut in 1999. Since that time she has been featured in concertos from the classical canon under leading international conductors, appeared as soloist with numerous US symphony orchestras, and played around the globe as a chamber musician.

Pianist Yalin Chi, a native of Beijing, made her début with the Central Opera Orchestra before moving to the United States to study. Ms. Chi has performed at major venues in New York, Korea and China. She performs as an orchestral musician with Albany Symphony and New Jersey Festival Orchestra, and holds the principal keyboard position at the Hudson Valley Philharmonic. The Woodstock Times described her recent recital in the Saugerties Pro Musica concert series as “flowing and masterful,” with “gorgeous tonal coloring.”

The Chapel Restoration is located at 45 Market Street, directly across from the Metro-North Train Station, where parking is free on Sundays. This concert is made possible, in part, through a grant from the Putnam Arts Council’s Arts Link Grant Program with public funds from the NYS Council on the Arts with support from the Governor’s Office and the NYS Legislature and from Putnam County and with contributions from the public