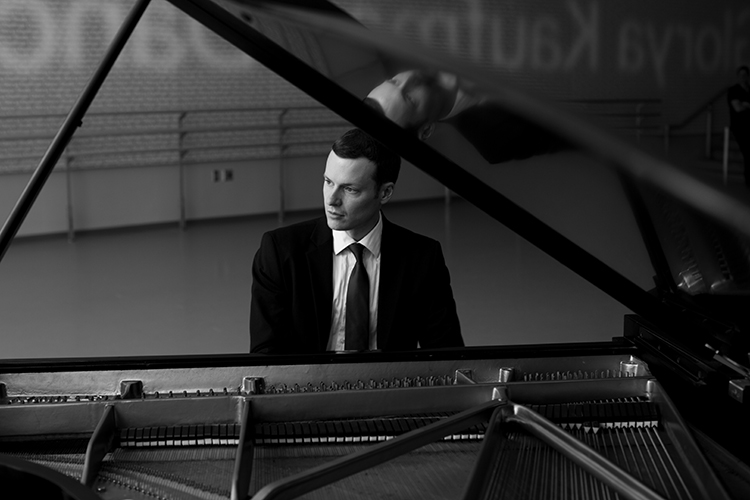 Pianist Aaron Wunsch enjoys a multifaceted career as a performer, presenter, and educator.  He has performed on concert stages throughout the US, Europe and Asia, including in Avery Fisher Hall at Lincoln Center, Weill Hall at Carnegie Hall, Duke’s Hall in London, at the Verbier Festival in Switzerland and as soloist with symphonies in the US and China. Lauded for his “masterful” chamber music performances (Hartford Courant), he has appeared at the Norfolk, Bowdoin, Sarasota, Great Lakes and Yellow Barn chamber music festivals, collaborating in performance with cellist Lynn Harrell, clarinetists Charles Neidich and Anthony McGill, violinists Miranda Cuckson and Jennifer Koh, and the Miró and Parker Quartets, among others.  He has worked closely with many composers, including Thomas Adès, Nico Muhly, and Kaija Saariaho and has performed new works by Saariaho and John Adams during Tanglewood’s Festival of Contemporary Music. His performances have frequently been heard nationally on Performance Today.

He studied at Yale University (B.A., cum laude), the Mozarteum in Salzburg (Fulbright Fellowship) and at the Juilliard School (M.M. and D.M.A.). He was formerly Assistant Professor of Piano at William Paterson University and is currently the Director of Keyboard Studies and Piano Curriculum at Juilliard, where he teaches piano literature, graduate studies, chamber music, and directs Juilliard PianoScope, the Piano Department’s performance series. He gives piano master classes and lectures at conservatories and universities in the U. S., Europe, and Asia, and he was 2010 Visiting Professor at Shanghai Normal University. His awards for written work in musicology include the Henry Hart Rice Prize and the Richard F. French Prize. His principal teachers in piano included Peter Frankl, Karlheinz Kämmerling, and Robert McDonald, and he also worked with Andras Schiff, Jerome Lowenthal, and Claude Frank; his history and theory studies were with Allen Forte, Robert Morgan, L. Michael Griffel, and Maynard Solomon.