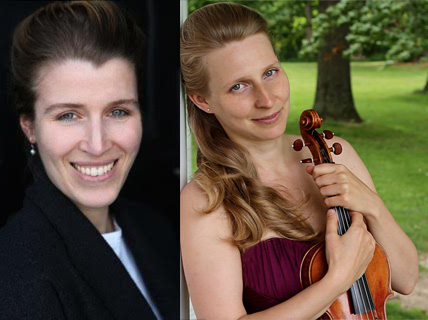 Summertime in England: British music from the baroque to the present

London-born Helena Baillie was hailed by The Strad magazine for her ‘brilliance and poignance,’ and stands apart for a rare ease on both violin and viola.  American Record Guide praised her ‘gorgeous singing tone’ in an album that ‘from the opening flourish will be a special recital.’

A prizewinner in international competitions including Munich ARD, Banff and Tertis, Helena has performed throughout Europe and the United States, with broadcasts on BBC Radio 3 and Performance Today for American Public Radio. She has collaborated in chamber music with Pinchas Zukerman, Midori, the Tokyo String Quartet, the Shanghai Quartet, and the Beaux Arts Trio, with whom she collaborated in a live broadcast from the Alte Oper in Frankfurt. Her love of chamber music has taken her to the La Jolla Summerfest, Tucson Winter Chamber Festival, and the Kronberg Academy Festival in Frankfurt.

Helena was honored by a Bard Fellowship from 2010-2015. While a Fellow, her projects included Bach Among Us at Bard’s Fisher Center, which Helena produced and performed in collaboration with dancers of the Bill T. Jones/Arnie Zane Dance Company. In an unconventional staging that reconsiders the traditional divisions between artist and audience, Helena invited audience members to share the stage with performers, creating an intimate and immersive concert experience. In her continued commitment to outreach and education, Helena has traveled across the globe to engage new audiences under the auspices of Midori’s Music Sharing Foundation.

Helena graduated from the Curtis Institute of Music, where she studied violin with Arnold Steinhardt and viola with Roberto Diaz. Pinchas Zukerman, Isaac Stern, Felix Galimir, and Leon Fleisher were formative influences. At Yale University, Helena studied violin with Peter Oundjian, and she spent a year in Berlin studying with the eminent violist Wilfried Strehle.

In addition to teaching violin and viola for the Bard College Music Program, Helena teaches at the Hotchkiss School.

Martina Baillie grew up in a musical family in St. Albans, England, and began playing piano aged 7, performing frequently with her family around the U.K.

She studied with Christopher Elton at the Royal Academy of Music in London before coming to the United States to attend boarding school and the New England Conservatory in Boston, where she continued her studies with Angel Rivera and Gabriel Chodos. Martina ultimately pursued a liberal arts education and law school and has practiced as a corporate attorney in New York City for most of her legal career. In November 2018, she joined a small firm in downtown Princeton, New Jersey to concentrate on land use law. She lives in Princeton with her husband and their two-year-old son.