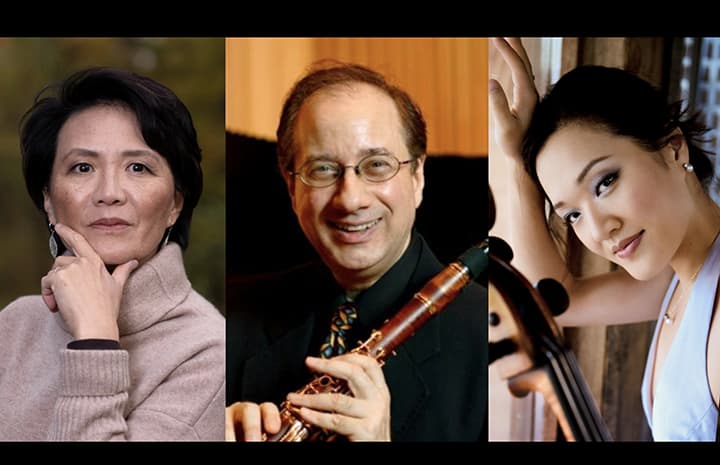 Canadian Korean cellist Soo Bae, was recently praised by The New Yorker as “superb” and by The Strad, for being “rich and romantic with crisp incisive technique” She has performed across the world from HongKong, Taiwan, Japan, Korea, New Zealand, Spain, Austria, Germany, Italy, South America, Canada and the US, including a sold-out debut recital at Carnegie’s Weill Recital Hall and prestigious venues such as Lincoln Center’s Alice Tully Hall, Kennedy Center in Washington, D.C , Forbidden City Concert Hall in Beijing, Oriental Arts Center in Shanghai and Tokyo Opera City Concert Hall in Japan. In addition, she was featured soloist for the closing ceremony of the Pablo Casals Festival in Puerto Rico, where she performed on Casals’ own instrument.

As a concert soloist, she was recently honored as the musician of the month in Musical America Magazine. Ms. Bae is also a winner of the 2005 Concert Artists Guild International Competition. In 2006, the Canada Council of the Arts awarded her First Prize in its Instrument Bank Competition, resulting in a three-year loan of the ca. 1696 Bonjour Stradivari cello. Earlier that same year, she became the first Canadian ever to win a prize at the Adam International Cello Festival & Competition in New Zealand. In 2009, she was awarded the McGraw-Hills Robert Sherman Award for Music Education and Community Outreach from the Juilliard School.

Her recent CD for the Naxos label featuring all ​of the ​solo cello works by Alfredo Piatti has been praised for the ‘staggering di​​splay of technical brilliance and outstanding range of expression transforming these works, often thought of as nothing more than etudes, into fulfilling musical jewels’.​ ​An avid chamber musician, Ms. Bae has collaborated with celebrated artists such ​as ​Richard Goode, Charles Neidich, Lynn Harrell, Joel Smirnoff, Michael Tree, Mitsuko Uchida, Arnold Steinhardt, David Soyer​ ​​and ​Peter Wiley among others. She has also toured with “Musicians from Marlboro” and “Curtis on tour” ​appearing in numerous chamber music festivals including Marlboro, Yellow Barn, Amelia Island Music Festival, Sarasota, and Verbier. As a supporter of new music, Ms. Bae has premiered new solo cello works ​written ​especially for her by such renowned composers as Huang Ruo, David Ludwig​ and Shinuh Lee.​

Soo Bae received her Bachelor of Music from The Curtis Institute of Music under Orlando Cole and ​her ​Master of Music Degree and ​the prestigious ​Artist Diploma from The Juilliard School where she also served as assistant faculty under Joel Krosnick​. ​Intensely involved in teaching, Ms. Bae has given master classes around the globe and has been asked to judge for various competitions including the recent Juilliard Pre-College Concerto Competition.​ Ms. Bae is​ the​ director and founder of Angelos Mission Ensemble Chamber Music Program in New Jersey​ which is dedicated to training and empowering young musicians to serve and love the community through music. ​She also teaches at the Curtis Summerfest in Philadelphia as a faculty to Young Artist Summer Program and Chamber Music and Orchestra for Adults Program.

Described as “uncommonly insightful, individualistic, lively” and “technically dazzling” by the New York Times, Ms. Chung has enjoyed great success as a recitalist, concerto soloist and chamber musician. In 1993 she won the Concert Artists Guild Competition and in 1997 she received the Avery Fisher Career Grant, the highest recognition for young concert artists in the United States.

Selected by Mstislav Rostropovich for a televised masterclass performance on public television at the age of 16, Ms. Chung has demonstrated a prodigious talent since her childhood. She possesses an exceptional understanding of and love for the works of J.S. Bach, Beethoven, Mozart, Mendelssohn and Schumann. In a live performance of the Goldberg Variations by J.S. Bach, The Wall Street Journal compared her playing to that of Glenn Gould’s legendary recording of the same in 1955. Her debut recording on the Channel Classics label featured Beethoven sonatas and bagatelles. Upon selecting this recording as a “Best of the Year” for 1995, Gramophone magazine noted: “Chung’s performance is inspired . . . a totally absorbing musical experience.” A Schumann disc followed, winning the Critics Association of Korea Award for best keyboard recording of the year. Channel Classics released two more CDs, featuring Bach’s Goldberg Variations and a second volume of Beethoven’s Sonatas and Bagatelles. In 2000, Ms. Chung premiered and recorded a work by composer Lee Hyla called Riff and Transfiguration on the Tzadik label, also to critical acclaim.

As a chamber musician, Ms. Chung has performed with celebrated artists such as Bernard Greenhouse, William Preucil, Philip Setzer, Ani and Ida Kavafian, David Shifrin, Charles Neidich, Carol Wincenc, Paul Neubauer, Ronald Thomas, Gary Hoffman, and Hilary Hahn. She has also collaborated with the Brentano, Borromeo, St. Petersburg, St. Lawrence, Miami, and Pacifica String Quartets among others. A former member of the Lincoln Center Chamber Music Society II, she has performed in concerts and educational presentations at Lincoln Center and the New York City metropolitan area. Her performances at summer festivals include the Mostly Mozart Festival at Lincoln Center, the Cascade Festival in Oregon, the Masterworks Festival in Spartanburg, SC, the Rockport Festival in Rockport, MA, and the Mainly Mozart Festival in San Diego. From 2002-2004, Ms. Chung toured Korea and the United States with violinist Catherine Cho for performances of Beethoven’s ten piano and violin sonatas. Her recent collaborations include two-piano recitals and concertos with pianist Alina Polyakov, a protégé of the celebrated Russian pianist, Emil Gilels. Their first CD with music by Ravel, Barber and Rachmaninoff was released in May 2013. In early 2017, a recording of the complete Brahms Piano Trios with violinist Elizabeth Larson and cellist Soo Bae was released on the Concert Artists Guild Records label. The 2019-2023 seasons include solo recitals in the US and Austria of works by Beethoven, Ravel, Schoenberg, and Zhou Long, a performance of the Brahms 2nd Piano Concerto with the Masterworks Festival Orchestra, a CD recording of the Brahms piano and cello sonatas with cellist Soo Bae on the Centaur Records label (to be released in 2022), and chamber performances with clarinetist Charles Neidich and cellist Soo Bae.

Clarinetist and conductor Charles Neidich has  gained worldwide recognition as one of the most mesmerizing virtuosos  on his instrument. With a tone of hypnotic beauty and a dazzling technique, Mr. Neidich has received  unanimous accolades from critics and fellow musicians both in the United States and abroad; but it is his musical intelligence in scores as diverse as Mozart and Elliott Carter that have earned for Mr. Neidich a unique place among clarinetists. In the words of The New Yorker, “He’s an artist of uncommon merit — a master of his instrument and, beyond that, an  interpreter  who keeps listeners hanging on each phrase.”

Mr. Neidich’s re-recording of the Mozart Clarinet Concerto, 26 years after his celebrated recording with Orpheus for Deutsche Grammophon, was reviewed by Corinna da  Fonseca-Wollheim in  the New York Times: “The mellow, woodsy tone of the basset horn stars in this pleasing recording of works for basset horns and/or clarinets (in various configurations) and orchestra by Mozart and his  Bohemian contemporary Jiri Druzecky. Charles Neidich’s reading of  Mozart’s Concerto for Basset Clarinet in A (KV 622) radiates sunny  serenity. But over the course of  the following works, including  Druzecky’s Concerto for three basset horns and  orchestra in F and a reconstruction of Mozart’s Adagio in F for clarinet and  three basset horns (KV 580a), the music takes on an inescapably narcotic  quality.”

Mr. Neidich is the artistic  director of the Wa Concert Series at  the Tenri Cultural Institute in New  York, which he founded alongside  his wife, clarinetist Ayako Oshima, in  September 2017. This critically  acclaimed concert series is inspired by the  Japanese concept “wa”—  meaning circle, but also harmony and completeness; each performance is  thus paired with visual arts and offers a variety of culinary delicacies prepared by Ayako Oshima. Summing up his experience with the  series  throughout the 2017-18 season, Frank Daykin of New York Concert Review advised:  “A word to the wise music lover: Run, don’t walk, to this series.”

In addition to performing as soloist, Mr. Neidich has in recent seasons, added conducting to his musical accomplishments. He has led the Cobb Symphony Orchestra and Georgia Symphony in performances of the Franck Symphony in D Minor and Mozart’s Clarinet Concerto (also playing the solo clarinet part).

In past seasons Mr. Neidich has appeared in recital and as guest soloist all over the world, and has been making his mark as a conductor. In wide demand as a soloist, Mr. Neidich has collaborated with some of the world’s leading orchestras and ensembles, including the Royal Philharmonic Orchestra of London, Concertgebouw of Amsterdam, the Leipzig Gewandhaus Orchestra, Halle Staatsorchester of Germany, Orpheus, the St. Louis Symphony, Jacksonville Symphony, Pasadena Symphony, San Diego Symphony, New City Chamber Orchestra of San Francisco, Athens Chamber Music Festival, Tafelmusik, the Juilliard, Guarneri, American, and Mendelssohn String Quartets, and the Peabody Trio.

Mr. Neidich commands a repertoire of over 200 solo works, including pieces commissioned or inspired by him, as well as his own transcriptions of vocal and instrumental works. A noted exponent of 20th century music, he has premiered works by Milton Babbit, Elliott Carter, Edison Denisov, William Schumann, Ralph Shapey, Joan Tower, and other leading contemporary composers. With a growing discography to his credit, Mr. Neidich can be heard on the Chandos, Sony Classical, Sony Vivarte, Deutsche Grammophon, Musicmasters, Pantheon, and Bridge labels. His recorded repertoire ranges from familiar works by Mozart, Beethoven, Weber, and Brahms, to lesser-known compositions by Danzi, Reicha, Rossini, and Hummel, as well as music by Elliott Carter, Gyorgy Kurtag, and other contemporary masters.

A native New Yorker of Russian and Greek descent, Charles Neidich had his first clarinet lessons with his father and his first piano lessons with his mother. Mr. Neidich’s early musical idols were Fritz Kreisler, pianist Artur Schnabel and other violinists and pianists, rather than clarinetists. However, the clarinet won out over time, and he pursued studies with the famed pedagogue Leon Russianoff. Although Mr. Neidich became quite active in music at an early age, he opted against attending a music conservatory in favor of academic studies at Yale University, where he graduated with a Bachelor of Arts, cum laude, in Anthropology. In 1975 he became the first American to receive a Fulbright grant for study in the former Soviet Union, and he attended the Moscow Conservatory for three years where his teachers were Boris Dikov and Kirill Vinogradov.

In 1985 Mr. Neidich became the first clarinetist to win the Walter W. Naumburg Competition, which brought him to prominence as a soloist. He then taught at the Eastman School of Music and during that tenure joined the New York Woodwind Quintet, an ensemble with which he still performs. His European honors include a top prize at the 1982 Munich International Competition sponsored by the German television network ARD, and the Geneva and Paris International Competitions. Mr. Neidich has achieved recognition as a teacher in addition to his activities as a performer, and currently is a member of the artist faculties of The Juilliard School, the Manhattan School of Music, the Mannes College of Music. During the 1994-95 academic year he was a Visiting Professor at the Sibelius Academy in Finland where he taught, performed and conducted. Mr. Neidich is a long-time member of the renowned chamber ensemble Orpheus.